Q: Can insects adapt to climate change using their behaviour?
Cold blooded animals  can change their temperature by moving between areas that are warmer or colder.  We know insects do this, but we don't know how much flexibility it really gives them.  Maybe they can precisely detect temperature and make the right decisions, or maybe they are stuck with instincts that cause them to be active at particular times of day, even if it's too hot.
A: This is a question we're working on right now!  We don't know the answer yet...  We do have some evidence that crickets from high altitudes are slightly different to those that live at low altitudes (study here).  However, it also seems that if we move crickets from high altitudes into low altitudes they survive perfectly well at the warmer temperatures...
Q: Can we measure frailty in wild insects?
Our work on ageing in crickets (below) has sparked questions about whether we can learn about broader questions of individual frailty.  Can we develop ways to measure the health of small and apparently simple animals like crickets?
A: This is another question we're working on right now...  Read about our plans for this work here.
Q: Why do females mate with so many males?
It’s easy to understand why males mate with lots of females, male reproduction is almost unlimited because sperm are so cheap to produce, but why females typically mate with more than one male is more of a mystery.  Matings inevitably take time and energy and they create risks of disease transmission and other costs. So why do females go along with it?

A: It seems that females actually benefit from mating with lots of males as they end up leaving more offspring than less promiscuous females; see discoveries. 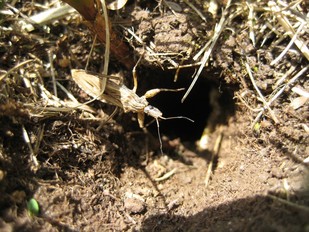 A nabid bugs waits to attack at the entrance to a burrow
Q: Is the most important thing for a male to just survive, or is it more important that he’s really good at getting females to mate with him?

A: There are lots of lab studies that show that males that have particular sexual traits (for instance in crickets, males that sing a lot) tend to get more matings. Our studies show that this is also the case in the wild, but that things are more complex than they seem in the lab.  For instance, if you’re a small male you get a lot more matings if you sing a lot, but if you’re a big male it doesn’t make much difference how much you sing, you get a lot of matings anyway.  For all individuals, one of the most important things is just living a long time, so the answer is that both things are important; see discoveries.
Q: If the best traits increase in the population why is there any variation left?  Why doesn’t everyone end up with only the best traits?

A: This is one of the biggest questions in evolutionary biology.  The possibility we’re investigating is that the best traits vary between years.  Maybe if it’s hot, it’s better to be fast and sing all day long and mate a lot, but if it’s cold it’s better to take things slow, and stick with one partner.  So in the hot years, the genes that make you fast find themselves in more offspring, and fewer of the slow genes survive, but if the next year is cold those few slow individuals do really well and have lots of babies and the next year the balance has been restored.

Q: Males sing to attract females - why don’t all the females mate with only the very best singing males?

Q: Is there a genetic conflict between males and females? If a new trait arises that makes one sex particularly healthy or attractive, it will tend to become more prevalent as those individuals leave more offspring. In theory, this can happen, even if the same trait tends to reduce the health of members of the other sex.  For instance, it might be good for men to have narrow hips so they can run faster, but the same trait in a woman might lead to problems in childbirth.  What we don’t know is how many traits of this type there are in natural populations, and how important they are in influencing how rapidly evolution takes place.

Q: Do insects like crickets that only live for a year die of old age, or is getting old and knackered out something that only happens to long lived animals and plants?

A: Ageing is another of the most important and least well understood aspects of biology. It’s amazing to think that we don’t even know if most animals age at all. All we know is that at some point they keel over and die.  We are developing new video analysis tools to see if crickets get slower and slower as they get older – watch this space! 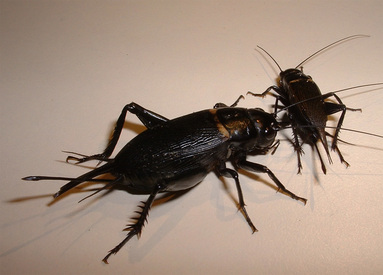 2 same age adult females. Why is one much bigger than the other?
Q: Nature or Nurture? Evolution depends on traits being heritable – males with beautiful songs have to have musical sons and females that dig the deepest burrows need to have expert burrower daughters.   Lab studies and breeding programs have shown that almost all traits are indeed heritable.  However, burrows can’t be deep if the soil in the spot where the female lives is rocky, and musical males may depend upon finding a lot of food when they are young, so in the wild, do environmental effects dominate genetic effects?

A: This is a question that needs a lot of data to answer it.  Each year we get a larger pool of parents and offspring and siblings and half-siblings which will eventually enable us to accurately compare the amount of variation that we see in traits that we can ascribe to genes and traits that stem from variation in the environment.